Join the Barbitec mailing list and get notification of new road test and reviews plus interesting BBQ related information delivered direct to your inbox.

We will try and keep you up to date with all sorts of News on BBQ development and techniques, news on whats going on in the BBQ Industry and what may affect you

“A Pizza Oven that looks the part!” 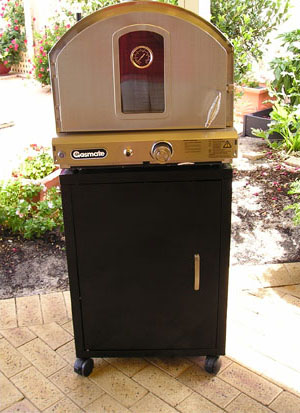 It took me about an hour to put the whole lot together but I am fussy and was very conscious of making sure that all was done properly and a couple of phone calls in between it probably would take 30 mins normally. The oven has a light inside and unfortunately the clip holding the wire at the back outside broke but this was a minor problem.

The transformer for the light has no holes at the back of my stand (instructions said it had), to attach it but four self tappers did the trick. All in all easy to put together.

I would have thought the addition of a battery included in the box would be good as most Barbeque manufacturers now provide one rather than a sticker on the ignition saying that there wasn’t one!

I have used a pizza oven before and found them fantastic, this is no exception, the heat output is huge when you think that it provides as much heat as about one and a half barbeque burners thereby saving heaps on running costs and that is when it’s on full blast!

There are 3 racks provided and one pizza stone which goes in the bottom of the oven to diffuse the flame which is a good idea when cooking roasts etc. Remember that this is an oven so you can cook virtually anything in it that you would normally cook in a conventional kitchen oven, what a bonus!

It reaches temperature quickly and cooks a mean pizza or two. Roasts are a breeze and bread comes out great too!

The light when on provides good light to see what’s cooking through the large glass window which is fine when you leave it in one place all the time as it does need a power point to plug it in to. Remember to remove the plug when moving it!

The Pizza oven comes as an LPG model and is approved to run on natural gas which is a bonus but don’t forget the rules regarding alfresco areas and that this appliance can only be used outdoors. It also has to be converted by licensed gas fitters (we do a lot of these conversions as we are Gasmate service agents)

There are a lot of accessories that come with the ovens that are optional extras which include covers, stands, pizza stones, cutters, trays, spatulas and oven mitts. I do wish that covers were included with the ovens though as it does keep them in good condition.

The pizza oven comes also in Black as well as stainless steel, the latter being the dearer, although if you shop around you can get them for less. There are also other stands available other than the one shown.

Warranty is 12 months, back to Reatiler, Manufacturer or Agent.

On a last note, if looked after properly, it should give you years of cooking pleasure, a definate for the discerning BBQ Chef!

Well done Gasmate, but I reckon with a cover and battery it would have made an 8!

For more information go to www.gasmate.com.au

**PLEASE NOTE THAT ALL OUR REVIEWS ARE COMPLETELY INDEPENDENT** All prices shown are current at the date of the review, we take no responsiblity if these prices are incorrect or have altered since our review and as such you will need to check with the retailer the correct current retail price at the time of purchase.

Note: all reviews are done entirely independently of the manufacturer or retailer. Any comments made are those of Barbitec and its reviewers. No responsibility is taken by Barbitec or its reviewers in any way for the comments made and comments given. The process is purely to aid the end user in their purchase of the product. We thank all the manufacturers and retailers for supplying each product for review.

King Tiger Prawns done for a light snack..recipe on my instagram page.........also click on the link below which is a pdf of the recipe:

We popped into Credaro wines in Yallingup about a week ago to have a taste or their wines, I have to say they were lovely so I thought that they would be worth a mention in case anyone goes down to

I get increasingly concerned when I talk to customers that have bought a Jumbuck BBQ from Bunnings and they ask me 'where can I get a Natural Gas' conversion Kit' ?

New BBQ products are coming in all the time, see our Barbitec independent product reviews and feel free to contact us for more info.

Have a question? We're here to help.