Join the Barbitec mailing list and get notification of new road test and reviews plus interesting BBQ related information delivered direct to your inbox.

We will try and keep you up to date with all sorts of News on BBQ development and techniques, news on whats going on in the BBQ Industry and what may affect you 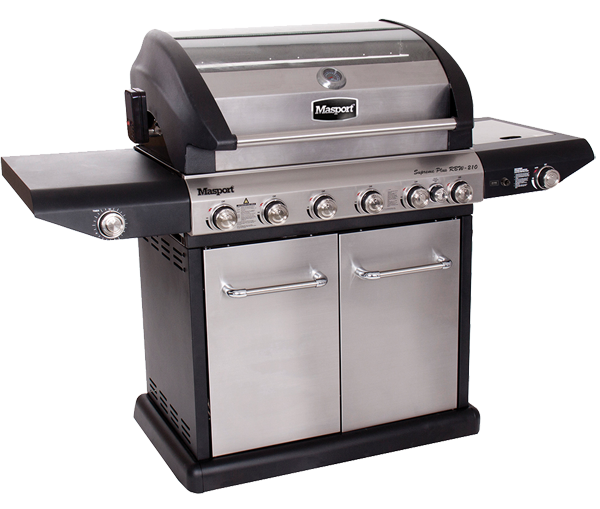 LOTS OF EXTRAS WITH THIS BBQ – Good looking and given the extras, not a bad price…

Manufactured by Masport – available at most leading Barbeque Retailers. This BBQ was sent to us by Masport for review, we are grateful for them giving us the opportunity to Road Test it.

Ok, the BBQ arrived in two boxes, one for the trolley and one with the main BBQ inside. It took two of us about 2.5 hours to assemble and I noticed that on the side of the box it said ‘Installation by an Authorised person’ so I guess most retailers offer an assembly service these days. That way you know it’s been put together correctly! We had no nuts or bolts left over but lots of cardboard and packing which is a good sign, meaning it was packed well..

It has a good sized roasting hood with the glass panel towards the back so that you actually look over your food with the hood down while cooking rather than trying to make out if its cooked from the front, rather novel.

All burners have electronic ignitions operated from a push button electronic box (and yes a battery was included). The burners are of a tubular type which to be honest I am not a fan of as they can clog up and do not normally last as long as traditional cast iron ones. Heat output is not bad with a rating of just under 100Mj/h for the whole BBQ which won’t mean a lot to the novice but one normal cast iron burner runs at about 17-18Mj/h. It has 6 main burners, one side burner and a back burner (infra red grill) as well as a large ‘warming / cooking’ rack. The side burner is a standard one and I would have liked to have seen a brass wok burner instead but I guess cost is the factor there.

The drip tray has a second 'drip catcher' system located conveniently at the back, easy to get to…that leads all your fat juices straight to it!..

Also comes with a large enamel plate, enamel grill, flame tamers, plate and grill handle lifter as well as a separate internal inset cooking system with a pizza stone, reversible hot Plate, grill insert, kebab racks, a BBQ cover and a rotisserie and motor (again with batteries)….phew!! Oh I forgot and a barbeque book, with a few recipes...would be good to have a little slot on the outside to put all the extras in though, rather than having to put them all inside the cupboard….

However, I think that for the discerning BBQ fan this one has virtually everything. Masport has been around for a long time and their products are usually well made, this BBQ is no exception to that……

You have to remember that a BBQ will last as long as someone wants it to. If it’s not looked after no matter how much you pay it will NOT last!

I think that one of the best things about this BBQ is the back burner/infra red grill. This would certainly sway me to buy it as using the rotisserie in conjunction with the IR grill is awesome!

I actually cooked a lamb roast on the infra red grill.. about a 2.5kg joint just simply marinated with Extra Virgin Olive oil, pepper, sea salt and a little freshly chopped rosemary….and about one hour before the end of cooking I mixed some honey, EVOO, garlic, cracked pepper and a little white wine vinegar and brushed over the rotating lamb..Delish! Took about 3-4 hours with the hood open with just the IR grill on, hey I was in no hurry and to be honest there was no mess at all, in fact the BBQ looked as good as new. Even when I put the hood down it didn’t dirty the glass at all…well done Masport! There is method in their madness!

Just remember that it does take longer using the back burner and to speed it up (as I had the hood open ) you can close the hood and put the left and right hand side burners on…This is a really economic and tender way of cooking but remember you do need time…….

Here are some piccies of the start, finish and ‘plating’…. 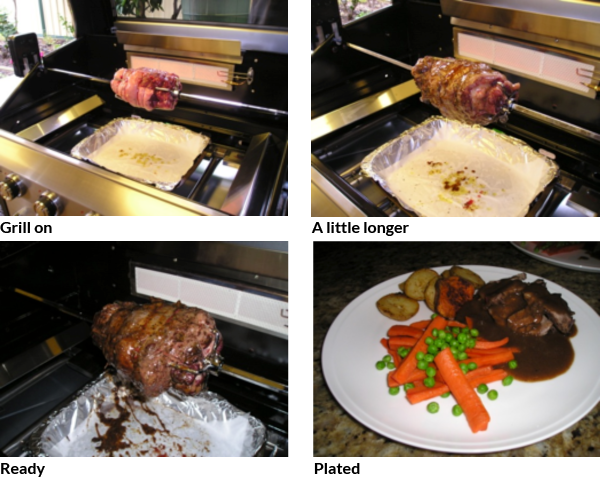 The BBQ has two years on everything apart from the main BBQ grill body that the burners etc. sit in, that has 5 years, the burners and valves 2 years.

**PLEASE NOTE THAT ALL OUR REVIEWS ARE COMPLETELY INDEPENDENT** All prices shown are current at the date of the review, we take no responsibility if these prices are incorrect or have altered since our review and as such you will need to check with the retailer the correct current retail price at the time of purchase.

Note: All reviews are done entirely independent of the Manufacturer or Retailer. Any comments are those of Barbitec and its reviewers. No responsibility is taken by Barbitec or its reviewers in any way for the comments made and comments given. The process is purely to aid the end user in their purchase of the product. We thank all Manufacturers and Retailers for supplying each product for review.

I got a question today about flare ups and which BBQ to buy to avoid them?

We get a lot of calls regarding Beefeater BBQ's that require repair or service. This is the website that he will refer you too as Beefeater have their own service agents but get a quote first!

Ever thought of cooking on an electric Barbeque? Some of the ones out now are really good, some can even be used in an indoor area, but check first! These ones looks pretty cool to me..

New BBQ products are coming in all the time, see our Barbitec independent product reviews and feel free to contact us for more info.

Have a question? We're here to help.